Consumers have always selected cosmetic products that deliver a result, while sensory stimulation was considered a secondary benefit, especially in mass market products. Today, consumer demands are growing: products must still deliver results -and do so quickly- but also amaze on many levels, even from the first use . Appealing to the senses is one way to make a lasting impression on the consumer in a short window of time. Appearance, fragrance, and texture are key elements in making an emotional connection with a consumer.

How a product feels to the touch is an important factor in the product selection. Transforming, surprising, innovative and unusual textures can make a lasting impression , but consumers assess texture even subconsciously, linking it to functionality and even value. For example, a thick lotion can be perceived as more moisturizing than a thin one.

Waxes contribute to formula functionality and sensoriality, which is why they are widely used in cosmetic and OTC drug applications. From a functional standpoint they are film formers capable of replenishing the skin’s natural lipids and contribute to water retention by the stratum corneum . As for sensory ingredients, waxes are well known for their thickening properties, but we have found they also offer a wide variety of sensations when applied to the skin. In anhydrous systems, waxes interact with oils to produce an extensive range of textures: jellies, sticks, transforming textures, creams, balms, etc. In emulsions they thicken the formula, as well as affect product esthetics such as gloss, firmness, rub-out and after-feel. In this article we will limit our focus to beeswax and its application in anhydrous formulations as a texture modifier.

Beeswax is the oldest wax known to man, with documented waterproofing uses dating as far back as 7000 BC . Beeswax has been considered a valuable resource ever since, and its use in cosmetics can be attributed to ancient Chinese people, who used it in early nail enamels.

Today, beeswax is widely used in many different areas of application, including cosmetics. In 2018, 48% of new products launched in the lip care and lip color categories with a “natural” claim contained beeswax. The persistence of beeswax usage across the globe and throughout time is due to its effectiveness and its uniqueness; including as a texture modifier.

The science behind beeswax

Waxes are water-insoluble, solid mixtures of long-chain hydrocarbons and/or esters of higher fatty acids and alcohols. They become soft, pliable, and liquid when warm and variably hard when cold . Because of this broad definition, waxes are generally classified according to their origin, allowing the chemical composition to be narrowed down within each category. Beeswax, like other natural waxes, is a complex mixture of long chain monoesters, hydrocarbons, and free fatty acids, but its uniqueness lies in the presence of polyesters, free fatty alcohols, and minor components.

Beeswax is biosynthesized by honey bees (Apis Mellifera). The process is complex, but in short, worker bees metabolize the monosaccharides found in their food sources into the lipidic components that constitute virgin beeswax . This newly secreted beeswax is then mixed with propolis – a diverse mixture of resins, oils, and pollen collected by the bee from surrounding vegetation – and chewed by the bee until it is ready for building the honey comb, with the purpose of supply storage and brood protection.

Formulation chemists will benefit from understanding both the composition of beeswax and its physical and chemical properties, as this complexity will play a role in the final formula attributes, including appearance, stability, sensory profile and performance.

When beeswax is heated above its melt point and combined with a suitable solvent (vegetable oils, paraffin oils, silicone oils, etc.) and then cooled to room temperature the resulting product is called an organogel. These systems have been extensively studied in the food industry (as a replacement for trans-fats) and the technology is applicable to cosmetics as well. In fact, a good understanding of organogels can be key to a successful anhydrous formulation. In these gels, the beeswax molecules are solvated by the liquid portion of the gel; upon cooling they self-assemble into a three-dimensional network where the liquid is entrapped within. These networks are thermo-reversible and have viscoelastic properties . Many waxes thicken and structure oils in this manner and the gel hardness is always proportional to the percentage of wax. However, the rest of the textural properties are not so easily predicted, as they depend on a balance between the solubility (and insolubility!) of the oils and the waxes. Furthermore, the manner in which the gel is cooled will also have an impact on texture: gels that cool undisturbed will be harder than gels that cool with mixing. 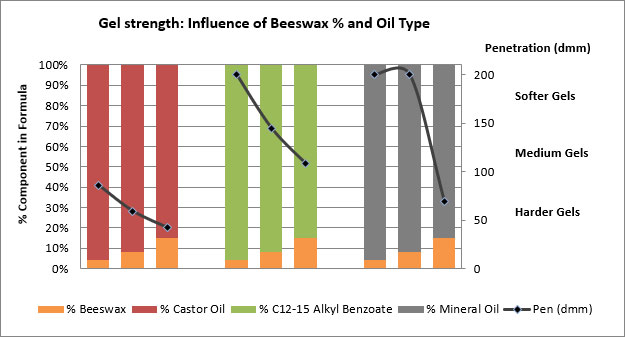 Figure 1. Gel strength as a function of beeswax percentage and oil medium.

Figure 215 shows the hardness of the same oil (castor oil) gelled with three different waxes (beeswax, candelilla wax and sunflower wax) at three different concentrations. Again, higher wax percentage yields harder gels, but beeswax is a moderate gelling agent when compared to other natural waxes such as candelilla wax, sunflower wax or rice bran wax. This is because its chemistry is more diverse: the polyesters, polycolsanols and minor components make it unique and give it a second functionality as a plasticizer (Puleo, S., personal communication, March 2018). Plasticizers are important in anhydrous formulations, as they contribute to stick integrity, smooth textures, even color deposition, and solving many gel issues like crystallization, “sweating”, and bloom. In fact, many anhydrous formulations use an added plasticizer in conjunction with beeswax: in low viscosity formulations they are necessary for the gel stability, and in hard formulas, such a lipstick, the role of the added plasticizer is to prevent the stick from becoming brittle. 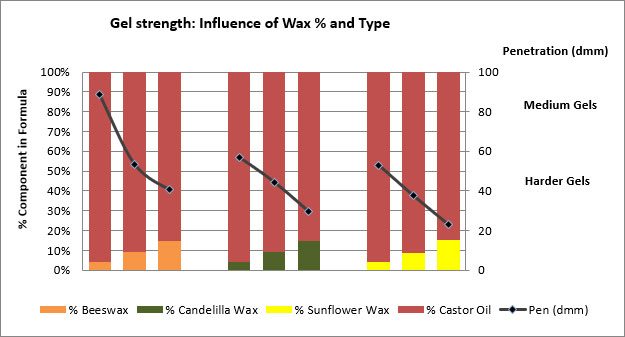 Figure 2. Gel strength as a function of wax type and percentage.

The variation in percentage will be determined by the final formula application, the texture desired, and the remaining ingredients. In very simple sticks or pots, beeswax can provide both structure and plasticity on its own (see Formula 2) making the formula texture easy to predict and modify. However, the simplicity of the system will limit the range of textures available. As the formulation increases in complexity, so do the sensory attributes, and small modifications will yield a wider range of textures, although they are harder to predict.

In Table 2 there are ten different formulas, each one with a very different texture. For each one we broke down the composition into beeswax, high melt point/hard gelling wax(es), plasticizer(s), and other ingredients. For each one, we recorded physical properties (formula hardness and melt point), as well as sensory attributes (glide, pickup/payout, tack, and creaminess). 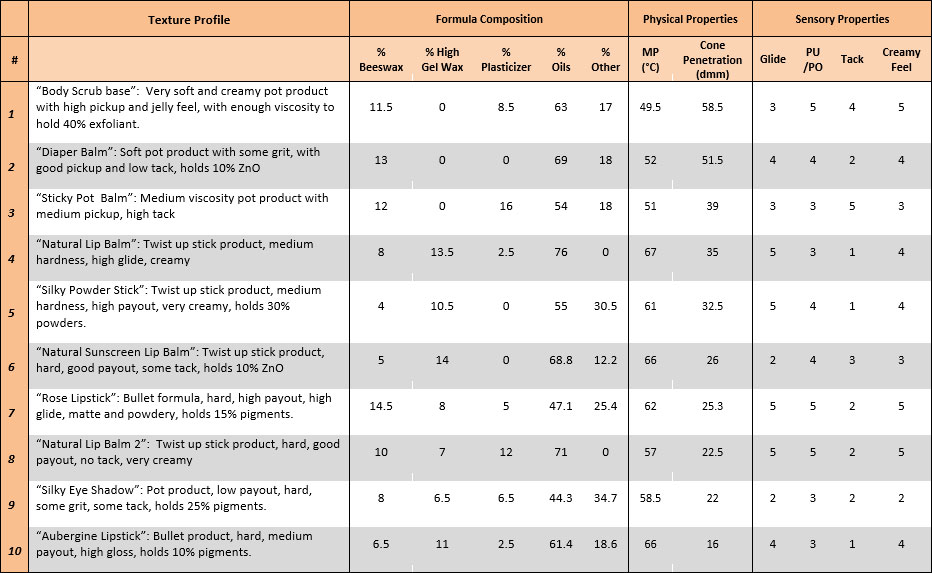 Table 2: Composition breakdown of cosmetic formulas and relationship with texture

In order to correlate formula composition to formula texture is was necessary to look for trends in wax content versus trends in properties. In Figure 3, the composition of each formula from Table 2 is plotted on the y-axis, while penetration and melt point are plotted on the secondary y-axis. In this case the formulations are presented in increasing order of structuring waxes (beeswax + high melting/hard gelling wax). The increase in melt point and decrease in penetration (increased hardness) are easy to observe and were recorded as such. In Figure 4, the sensory attributes were originally plotted on the secondary y-axis, but in this case, the trends were a lot more subtle and we used the calculated linear trend line to visualize any trends and the slope of the line to quantify the trend. 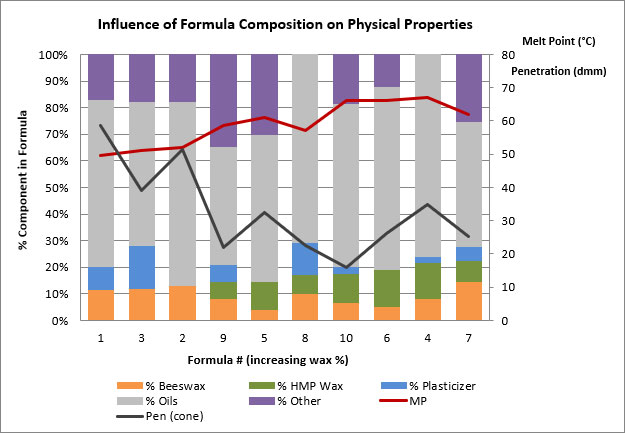 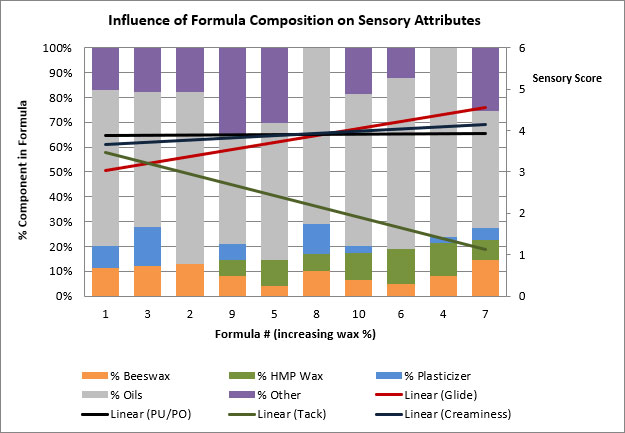 Using the sorting feature from a spreadsheet, formulas were organized in different orders of increasing component or combinations of components and all trends (or lack thereof) were recorded.

The results are shown in Table 3.

A word on replacements

For subtle changes in texture, replacements with beeswax derivatives are an option. The unique chemistry of beeswax allows for the preparation of many derivatives, usually via esterification of the free fatty acids with suitable alcohols. Replacing beeswax with a derivative can have a tangible impact on final formula esthetics, and also increase the application range of beeswax. For example, Peg-8 Beeswax and Polyglyceryl-3 Beeswax (Cera Bellina) both have a higher polarity than beeswax, making them compatible with a wider range of cosmetic ingredients, including sunscreens, or even water.

Beeswax is a well-established, unique, and versatile raw material in the cosmetic industry. Formulators who are familiar with beeswax are aware of its functions as a thickener, film former, plasticizer and even emulsifier. We believe a deeper understanding of beeswax chemistry and how this raw material will work as a texture modifier can open many new doors for cosmetic formulators.