Sunflower Wax is a modern structuring wax that provides formulations with efficient oil gelling and structure. It is a highly compatible wax, which can be used in most applications as the studies show. The pages below reviews the origin, chemical composition, and performance possibilities with this natural wax.

The Chemistry of Sunflower Wax 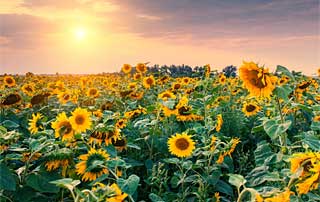 To obtain further details on this program, use information in your marketing story, or ask other questions, email us HERE.

Put Your Hands Up Deodorant

Friends of the Sea Mineral SPF

The sunflower (Helianthus Annuus) is an annual plant in the Asteraceae family. It is native to North America, but has spread to many tropical and temperate countries. Sunflowers are easily identified by their height, their bright yellow / orange color, and their complex flower head. The flower head is made up of thousands of small individual five-petaled flowers, called disc flowers, arranged in spirals in the center area, surrounded by brightly colored outer flowers, which resemble petals, called ray flowers.

If the disc flowers become pollinated (thank you bees!), they mature into seeds, which contain 30 to 40% sunflower oil. Sunflowers are grown all over the world for oil harvest, which has many applications, including direct human consumption[i].

Crude oil extracted from sunflower seeds can contain 200 to 3500 ppm of sunflower wax (INCI: Helianthus Annuus (Sunflower) Seed Wax). The wax can crystallize out of the oil when cold, generating a turbidity that diminishes the marketing properties of cooking oil, and must be removed prior to sale[ii]. Ironically, what was once considered an “impurity” or “waste” product has been upcycled to have many uses on its own.

The following diagram outlines the current method of extraction of sunflower wax from the seeds. 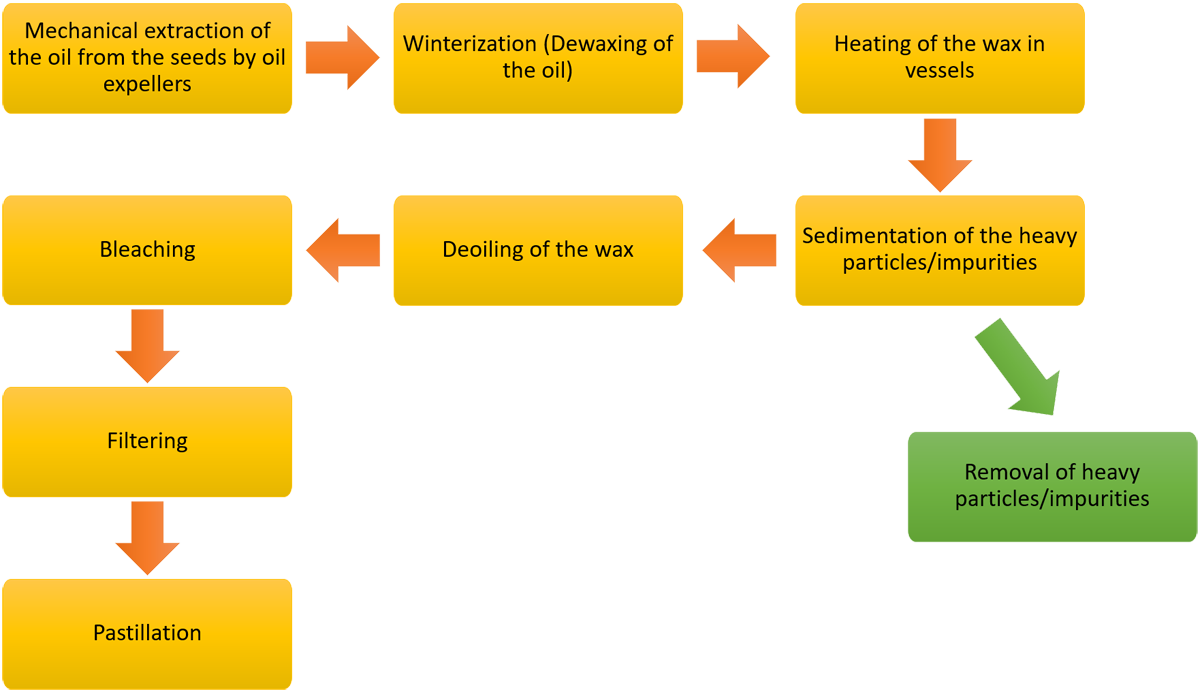 All waxes are hydrophobic in nature, making them ideal for use in cosmetic and OTC drug applications as film formers that block trans-epidermal water loss in the stratum corneum[iii]. Waxes are commonly known for their thickening or structuring properties, but are also sensory ingredients. Multiple studies have shown they can provide a range of texture options, depending on the nature of the wax and the formulation that contains it.

Sunflower wax provides structure to many anhydrous systems, regardless of oil medium or presence of pigments/powders. Even at low percentages, it can improve high temperature stability, preserve stick integrity, and offset a tacky feel. For these reasons, sunflower wax is typically used to create hard sticks, including lip balms, lipsticks, and deodorants. It can also be used as a replacement for typical “no list” ingredients, such as polyethylene, paraffin and other petrochemical waxes.

Using sunflower wax in personal care formulations is an easy way to marry the increasing demand for “clean” and “transparent” marketing with the perpetual need for functional ingredients.

Many waxes are used in cosmetics to thicken and structure oils by building a three-dimensional wax network that keeps the liquid oils entrapped and immobilized. This network is called an organogel, or simply, a gel. The hardness or strength of any gel is shaped by many factors including the compatibility and solubility of the wax and medium, the chemistry of the wax, and the organization of the crystals in the network it forms.

Gel strength is evaluated by measuring the distance traveled by a cone after its vertex pierces the surface of the gel. Referred to as penetration, it is measured in increments of 1/10 mm. By plotting penetration values vs. percentage of sunflower wax in different oil mediums, we can build a gel strength chart. The chart is a visual guide to the wax level needed to gel a given oil medium to a specified hardness. Note: When reading a gel charts, the penetration numbers are inverse to the gel hardness; the lower the value the harder the gel, and the higher the value the softer the gel.

To build this gel chart, ten oils were selected based on their chemical functionalities (refer to Table 1), and current popularity of use (Mintel, 2020). Each oil was structured using increasing levels of sunflower wax, and penetration values were recorded. 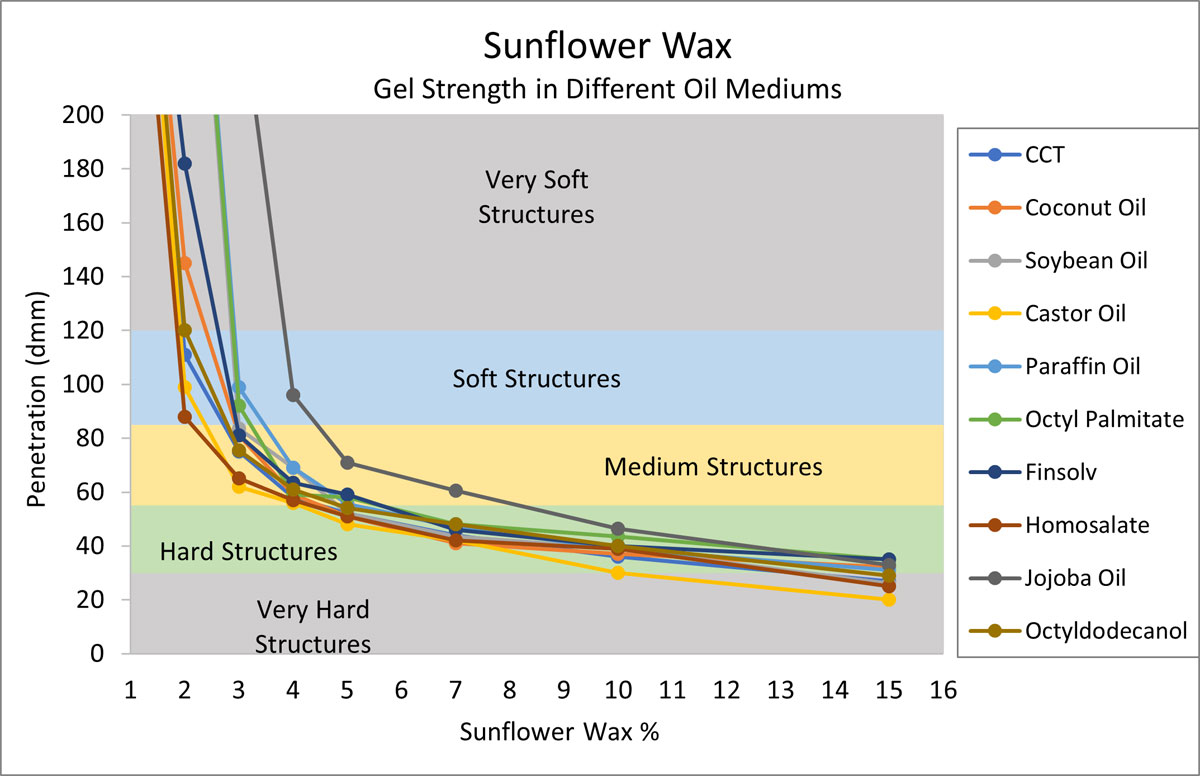 In Figure 1, we see that sunflower wax is an efficient structurant in every oil category tested.

The purpose of the next experiment was to compare the structuring properties of sunflower wax with other typical structurants. For this gel chart (Figure 2) Caprylic/Capric Triglyceride (CCT) was selected due to its wide spread use and ability to form hard structures efficiently with sunflower wax. Aside from sunflower wax, six structurants were selected based on popularity in anhydrous systems (Mintel, 2020). CCT was structured with increasing amounts of each structurant, and penetration values were recorded. 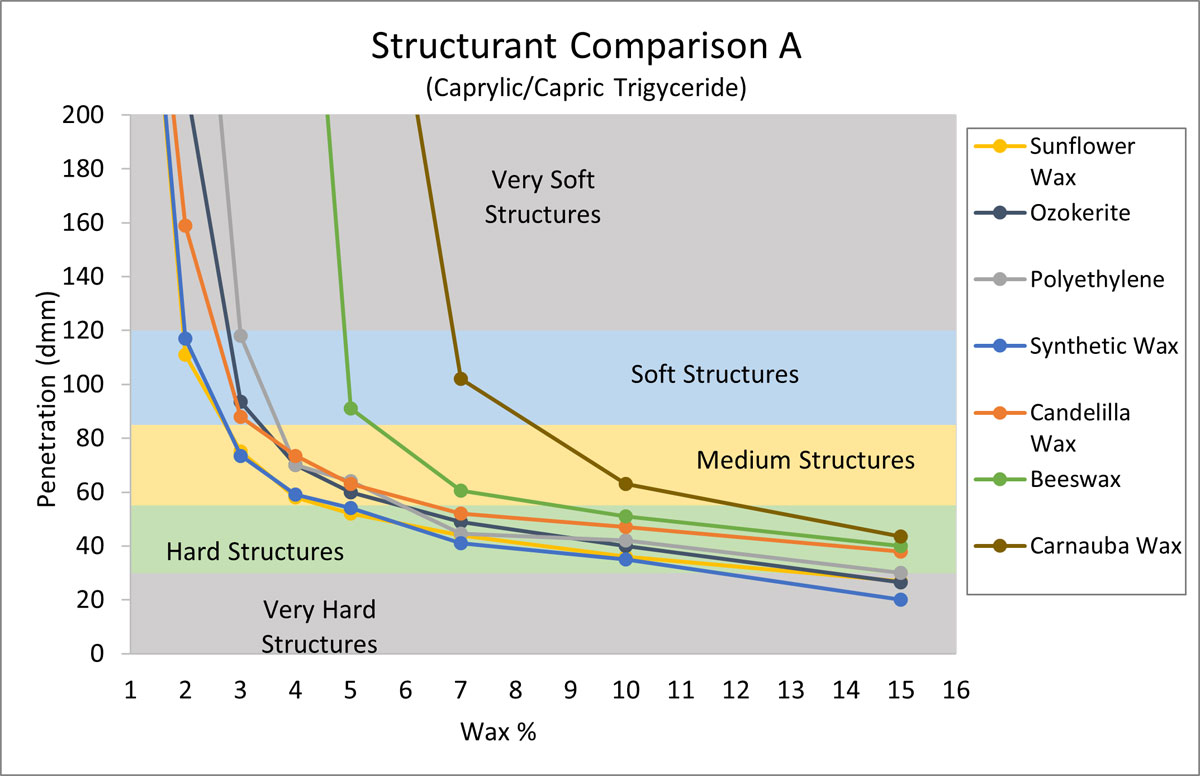 In Figure 2, we see that sunflower wax is equally effective in structuring CCT as synthetic wax, and a touch better than ozokerite, polyethylene, and candelilla wax. By contrast, beeswax and carnauba wax require higher levels of wax to build structures. The key takeaway is that sunflower wax structured CCT as effectively as the synthetic waxes, and more effectively than other waxes including some naturals.

The purpose of the next experiment was to compare the structuring properties of sunflower wax with the same structurants from Figure 2, but this time in an oil medium that is more difficult to structure. From Figure 1, octyl palmitate was selected, as it was one of the softest gels. For Figure 3 octyl palmitate was structured with increasing amounts of each structurant, and penetration values were recorded. 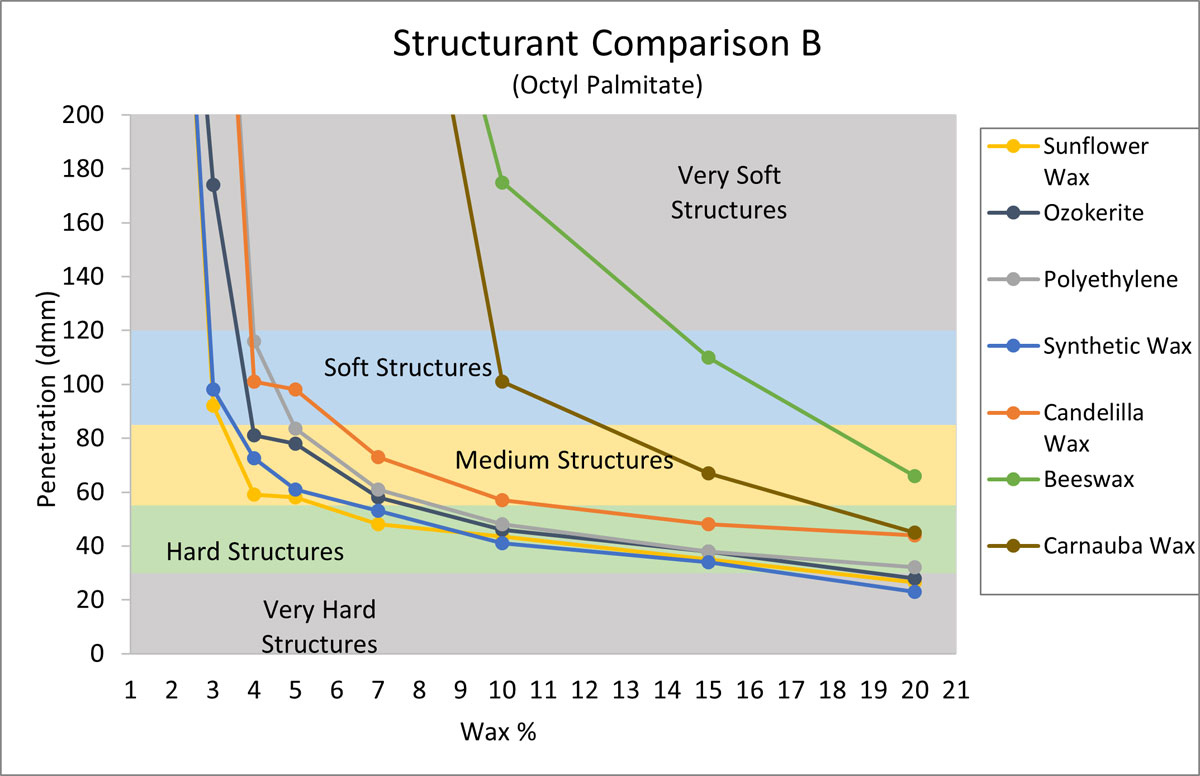 In Figure 3, we can see how much more difficult it can be to structure octyl palmitate. Beeswax and carnauba wax were not effective at all, while the synthetic waxes did build structure effectively. Again, sunflower wax was the most effective of all the waxes tested.

All studies point to the same conclusion:
Sunflower wax is the most efficient structurant.

Experienced cosmetic chemists know a dependable way to make a sturdy stick is a combination of three waxes: Candelilla wax for hardness, beeswax for flexibility and pay-off, and carnauba wax to increase the melt point. Alternatively, petrochemical waxes like ozokerite and polyethylene have been used instead of candelilla.

This reliable trio does have its limitations when it comes to oil selection. In stick formulations, liquids matter: the right oil combination can provide the perfect amount of slip, deposition, creaminess, payout, and after-feel. If the “old” wax triad doesn’t structure that perfect oil combination, what can formulators do?

Cosmetic chemists choose emollients based on the final stick properties they want to achieve. There is an extremely large number of choices, which can be classified into smaller groups following different criteria. For studies on gel formation and oil structuring, our lab classifies emollients into groups that have similar functional groups, which tend to gel similarly to each other (see Table 1).

A New Way of Thinking

As concluded in all of our experiments, sunflower wax is the most efficient structuring wax. Sunflower wax can replace both candelilla and carnauba wax because it structures and increases the melt point at the same time, without introducing any of the incompatibility issues carnauba wax has. Sunflower wax can easily replace many synthetic waxes in all mediums tested, including polyethylene, ozokerite, paraffin and synthetic waxes. Finally, sunflower wax has been proven to be highly compatible in a variety of mediums, which is not true for other waxes.

There is a fair amount of trial and error when formulators work with anhydrous systems. Gel charts are a helpful, time-saving tool when working with these systems, whether building formulations from scratch, as well as when making replacements.

Your customer is asking for a reef-friendly, hard sunscreen stick, where chemical sunscreens are acceptable, but polyethylene is on the “no” list. Sunflower wax could be the perfect candidate for structuring a stick like this. The desired hardness should be high and the major oils for this system include Homosalate, Octocrylene, Finsolv, Mineral Oil, and CCT. 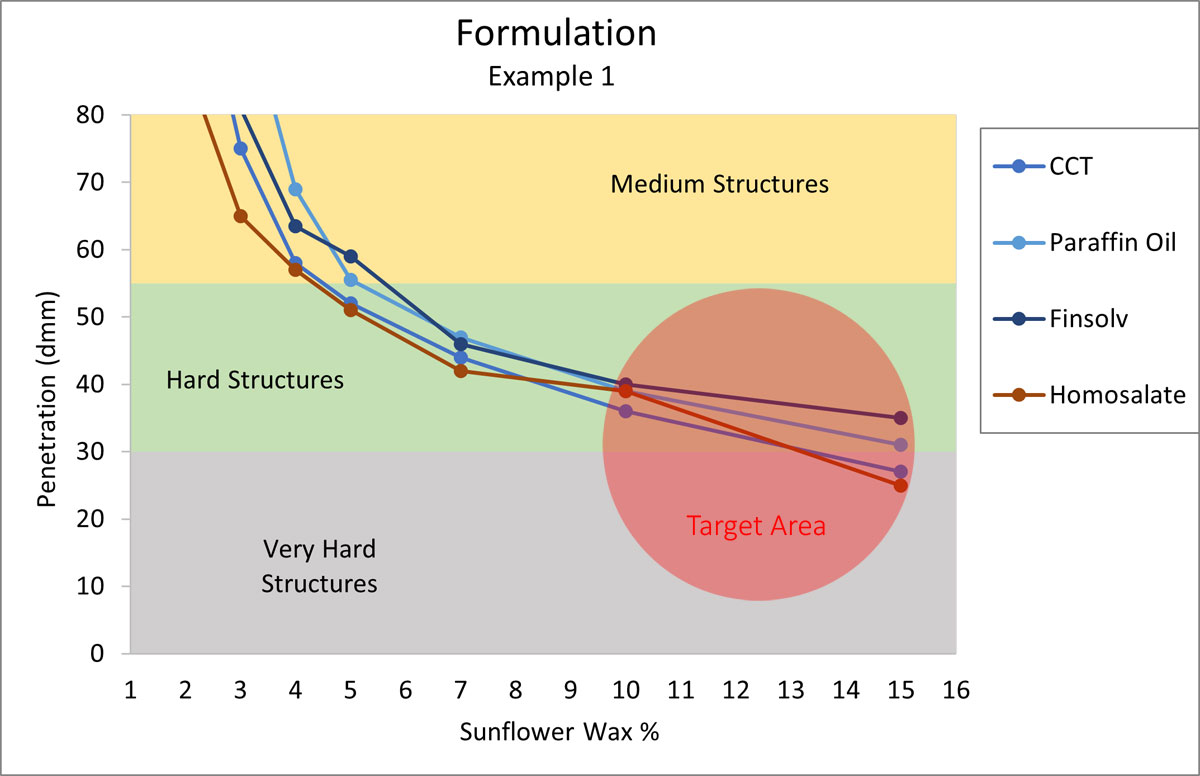 According to Figure 4, the formula needs around 15% Sunflower Wax to start. The percentages are characteristically accurate for the first draft of a formula. As the development progresses, the actual number will vary depending on the other components present in the formula.

Your customer is asking for a vegan, natural deodorant, without any petrochemical derived ingredients. The stick should hold its shape, have a quick and even pay-off, and a “medium to hard” structure. Again, Sunflower Wax should be the perfect candidate for structuring the stick. The major oils for this system are coconut oil and CCT. 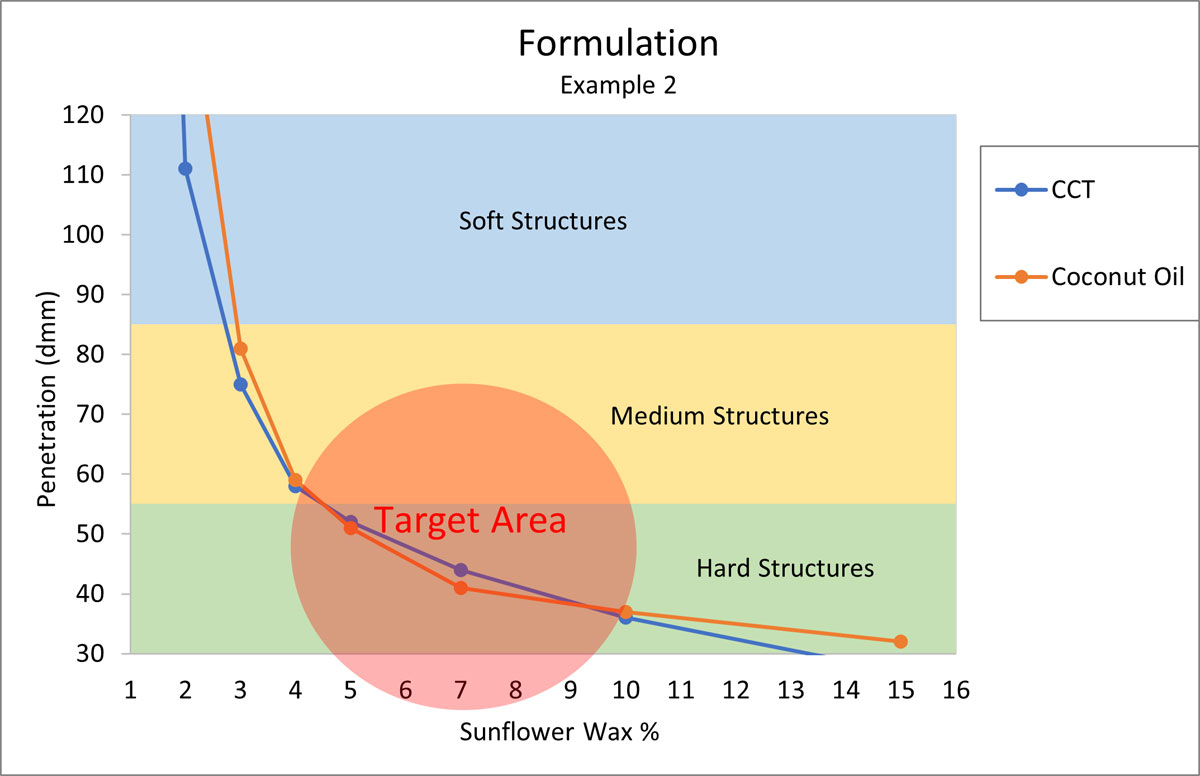 According to Figure 5, the formula will need about 7% Sunflower Wax to start.